Through high school and the college days, I heard whisperings of a New Age complex in the next county over, Buckingham. I would make deliveries to Buckingham for the family office supply business. There was one small sign on the roadway that said “Yogaville.” I didn’t know anything about it.

Some years ago, I volunteered at the Appomattox County Visitor Center. They had lots and lots of brochures from all over. If I were keeping a clip art file, it would have been Heaven. There was a brochure for something called LOTUS that caught my eye.

I took the brochure home and had a look. It was the New Age complex in Buckingham. They had directions and information about the place. Their founder, Sri Swami Satchidananda, had apparently invented Integral Yoga—hence the name of the area. Inside the Yogaville area is the LOTUS, a building that looks like a lotus flower. It appeared to be a religious center that leaned toward Eastern religions. But, the pamphlet said that they represent all faiths. The brochure asked visitors to wear “attire appropriate for a place of worship.” LOTUS stands for Light of Truth Universal Shrine.

In the summer of 2012, a friend from high school, Robby, was in town. He mentioned that he had been to Yogaville, and that we could go. Robby was a cool guy. He was a world traveler, street performer, and part-time philosopher. During the drive, Robby said that he had quit drinking and started going to meetings.

At the entrance to the compound, there was an oddly designed archway. After that was some driving through the woods on a single lane road. We were on the way up a hill when Robby said, “There’s your first look at it.” It was a big pink building on the right. The thing was so completely out of character with the surrounding energy that it seemed a mirage.

There weren’t many cars in the parking area. We went into the welcome center/gift shop, and the fellow who was nice enough asked if we had been there before. Robby said that he had, but the guy gave the spiel anyway.

We went to the museum below the shrine. They had a bench outside and a sign that asked visitors to remove their shoes before entering.  There was a glowing globe in the middle. To get to the shrine, we had to go up a thin spir 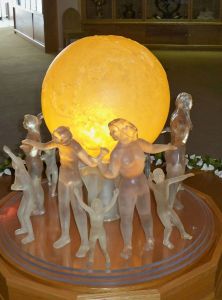 As we entered the room, I felt a strange energy, a sense of calm. It wasn’t unlike the feeling that I would get walking into a church, a Catholic church. There were twelve faiths represented in the LOTUS. Their claim is that all religions are equal since they come from the same source. There are many religious people of many faiths who surely would find that highly offensive, even blasphemous—many people like that live around here.

There were twelve altars, each representing a different faith.  In the center was a glass tube coming from the ceiling, filled with sunlight. Each of the altars had a neon light stretching across the ceiling to it. It was pretty cheesy.

Robby and I ended the trip at a lookout on top of a high hill, with a grand view over the scenic landscape. It was truly beautiful. I couldn’t imagine how much just the land for Yogaville cost (700 acres).

There is a lot of talk calling the Integral Yoga practitioners a cult. Swami Satchidananda certainly classifies as a charismatic leader. He had multiple accusations of sexual misconduct. From what I’ve seen, it looks like he did coerce followers into doing sex things to him. He died in 2002. Some say that when the leader of a cult dies, the cult disbands; but with the high-dollar infrastructure, the cult of Yogaville couldn’t just fade away. I can’t say that I have the answer as to whether or not they are a cult; they just seem like nice people who believe a certain way.

I returned to the LOTUS the following year, with my parents. While I found the strange energy interesting on the first visit, I was creeped the hell out the second time. I won’t go back.