To quote Milhouse, “I’m not a nerd…nerds are smart.” I don’t even know the difference between nerds and geeks. Yet, I have no problem calling myself a vintage computer geek.

In its day, the Tandy 1000SX was one of the best personal computers available. The graphics were unique–better than CGA.  My Dad bought one for the family office supply business in 1986.  It must have had a previous owner since that model was  manufactured in 1984.

The hard drive is kaput—at least for now. I’ve had to reformat it several times, it is a pain. It’s a thought intensive process. It’s been so long that I would need to do a lot of reading and such. I would guess it would be about four hours of work.

I’ve circumvented the hard drive and have set up an organization system with the old 5¼ inch floppy disks. It’s amazing how much DOS I remembered. I had to use DeskMate to write batch files, though. Without a hard drive, it took forever…a lot of swapping disks and changing file extensions from .doc to .bat, and so forth.

I have some rare, professionally published software. I don’t know where we got the first few disks of random software. There was some pretty neat stuff—ancient IBM programs. Some of them dated back to 1981. My uncle Ray gave me a ton of software. I wouldn’t have been able to make use of the computer without WordPerfect. He didn’t know how much I appreciated it.

Does anyone remember the days of 2400 Baud modems? When I started getting into CompuServe, that was the standard. 9600 Baud was a dream. I would go onto bulletin board systems and eventually hooked up with The Nashville Exchange. My first e-mail address was goofball@nashville.net. The first person I sent an e-mail to was Ann Koi. It was cool to correspond with her and other participants of zine culture.

The Tandy was the only computer I owned until 2001. My pal Clay gave me a 400MHz Pentium II just before he went into the Army. My first retail excursion after September 11th was to get a monitor. I ended up putting the Tandy in my tiny utility closet. 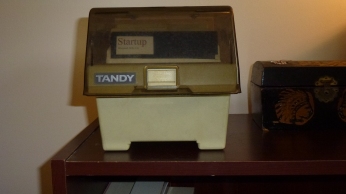 In my current dwelling, I have the Tandy set up in the guest room. It only works from the A: drive, but getting it set up so it’s functional has been a lot of fun. In the big box of ancient things, there were lots of floppies—many of them unlabelled. The only solution was to buy a floppy disk holder/organizer. I looked at Amazon, and they had a new one, but there was only one left. They sent me the wrong item and, by that time, the original one was gone. Frustrated, I went to eBay. The second listing I found was an actual vintage Tandy disk holder!

And, yes, I drive a Saturn.